A very rare pair of Seascapes by

There is no other known pendant pair of calm and stormy seas on this grand scale by Hendrick Cornelisz Vroom, the ‘father’ of Dutch marine painting, the first ship portraitist, and the most important marine painter of the first quarter of the seventeenth century

The scene of calm seas shows the Dutch fleet engaged in battle with either the Spanish or the Barbary pirates under a high blue sky. The date and Vroom’s signature are on the large ship in the foreground. It is around 130 feet long (approx. 37 metres) and has 23 guns.

Vroom creates a stylistic balance with realistic detail, as in the careful handling of the reflections in the water and the detailed painting of the vessels, which marks out his mature works and which has, at least in part, been responsible for his reputation as the first Dutch seascape artist. He is equally credited with the innovation of the long horizontal view, which is also demonstrated in this particular calm.

One of the features that make Vroom such a good painter is his masterly eye for detail in the rendering of the ships. It demonstrates his thorough knowledge of the shipbuilding of his day, which is evidenced by his careful attention to naval detail and the rigging of ships.

The tempest scene is a large genre piece with two sea monsters in the foreground. The dark colour of the waves seems to be the product of light on a windy day at sea. The sea monsters symbolise the unknown, lurking dangers of the deep and the hazards of life at sea. As such the subject of the picture appears to repeat the moralistic belief, perpetuated in contemporary emblem literature, of the occasional need to sacrifice all one’s riches in order to save one’s life. The inclusion of the monsters points to the implicit allegory of the ship as a vessel bearing mankind and the human soul across the perilous oceans of life. The rendering of the waves appears to be based on true-life experience of ships in a storm.

The artist has shown members of the crew in the masts to indicate that they are in control and will steer the ship to safety but must exercise vigilance and care. There is an emphasis on human perseverance in the face of great peril. The ships on the right and in the left background are pitching and tossing on the waves at the mercy of the elements.

According to Karel van Mander, Hendrick Cornelisz Vroom, was born in Haarlem in 1566 as the son of the sculptor and ceramist Cornelis Hendricksen. He started out as a painter of Delftware, and as a member of artistic family he undoubtedly received theoretical as well as practical training. He then travelled extensively in Spain, Italy, France and Poland. While he was in Italy Vroom became acquainted with the painter Paulus Bril, who encouraged him to start painting and gave him lessons. Between 1585 and 1587 he was in the service of Cardinal Ferdinand de’ Medici. His journey back to the Dutch Republic took him through Venice, Milan, Turin, Lyon, Paris and Rouen.

Back in Haarlem he married Joosgen Cornelisdr Gans and had two sons, Cornelis (c. 1590-1661) and Frederik (c. 1600-67), who both became painters. He did not stay at home long and was soon off on his travels again. This time he went to Gdansk to his uncle Frederick Hendrickz, who was the city architect and taught him the rules of perspective.

Hendrick Vroom had an adventurous life, and by his own account was shipwrecked on the Portuguese Berlenga Islands while on a voyage to Seville with a number of religious paintings. The pictures that washed ashore managed to convince the local monks that he was not an English spy, as the Eighty Years’ War was well on its way. Vroom painted pictures of the shipwreck and sold them on the spot. Another of his anecdotes is that he fell into a ravine on the col of St Denis but was stuck in a bush while his trousers froze to a rock. His many adventures are described in Van Mander’s biography of him in the Schilder-boeck of 1604. On his final return to Haarlem, he embarked on his career as a marine painter.

Van Mander describes and explains the origins of the new genre of painting as follows. ‘Returned home he [Vroom] continued, on the advice of the painters there, making pieces of ships, and gradually he got better and better at making them. And since 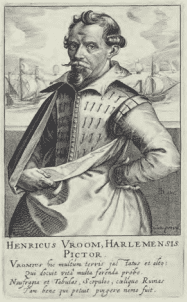 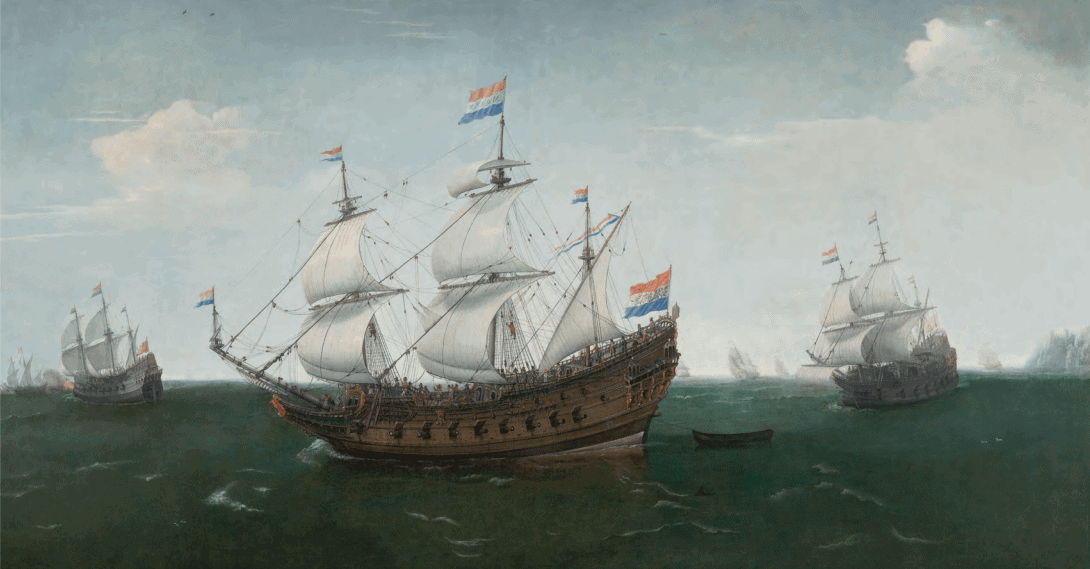 A very rare pair of Seascapes by

Hendrick Vroom had an adventurous life, and by his own account
was shipwrecked on the Portuguese Berlenga Islands...

there is much sea-faring in Holland, the public also started to take great pleasure in these little ships.’

Hendrick Cornelisz Vroom pioneered marine painting as a specialist genre as the Dutch rose to become a leading maritime power. He painted historical battles, ships’ portraits and views of maritime towns like Hoorn, Amsterdam and Vlissingen. He also had extensive knowledge of building and equipping early seventeenth-century merchantmen and warships. Vroom worked widely in Europe and built up an international reputation.

According to Van Mander, his fame rested not only on prestigious commissions for images of important battles and political events at sea. He also hailed Vroom for his attention to detail as well as his depiction of nature and scenery: ‘Vroom is an excellent master in this respect, in that he has not only much understanding
of ships, good rigging, ropes and tackle, pennants, sails and other things of that kind, but he is also excellent in all other incidentals such as pieces of ground, landscapes, rocks, trees, skies, water, waves, castles, villages, towns, figures, fishes and other things which accompany and enrich his ships.’

Hendrick Vroom is regarded as the father of marine painting and he pioneered the rendering of naval scenes and battles in a new style in which careful attention was paid to maritime detail and rigging. His highly detailed depictions soon brought him fame, enabling him to ask very high prices for them. Van Mander also says he was so productive that he earned a fortune from his work. Vroom was also convinced of his own talent and fame. In 1621, he asked 6,000 guilders for a commission, while Rembrandt, by comparison, received a ‘mere’ 1,600 for his Night Watch in 1642.

Vroom also started making tapestry designs and was commissioned to design six tapestries titled Battle on Zeeland Waters for the States of Zeeland, to commemorate some of the resounding victories over the Spanish fleet in the years 1572-1576. They are preserved in Middelburg Abbey.

In the 1590s he was commissioned to design a series of ten tapestries for the English Lord High Admiral, Lord Howard of Effingham (Earl of Nottingham from 1596), to commemorate his victory over the Spanish Armada. From 1650 these hung in the House of Lords in Westminster until they were destroyed in the fire of 1834. Fortunately they are recorded in engravings made by John Pine in 1739.

According to Houbraken, this first Dutch marine artist had Jan Porcellis (before c. 1484-1632) as his apprentice. Vroom outlived his pupil by eight years, dying in Haarlem in 1640. Another artist, Cornelis Claesz van Wieringen (Haarlem c. 1575–Haarlem 1633) owed a great debt to Vroom, and probably studied under him. 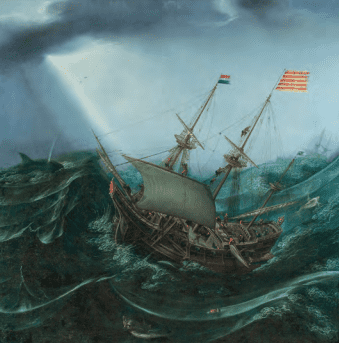