Menu
ENGEL HOOGERHEYDEN
A) Mustering the Batavian Fleet in Vlissingen Harbour, 1804 B) The Fleet Leaving Vlissingen to Sail to Boulogne for the Planned Invasion of Great Britain, 1804 , A pair

A) Mustering the Batavian Fleet in Vlissingen Harbour, 1804

B) The Fleet Leaving Vlissingen to Sail to Boulogne for the Planned Invasion of Great Britain, 1804

A) Mustering the Batavian Fleet in Vlissingen Harbour, 1804

Vlissingen harbour is crammed with ships, with the tower of the Oude Kerk rising up on the far left. The large frigate on the left
is being dismantled and is flying the flag of the Batavian Republic and the French pennant. The sails on the large ships in the background have been hung out to dry and the gunports are open. The gunboats by the quay are packed closely together.

There is a great bustle on the quay itself, with a canon being towed along in the middle, officers in their colourful uniforms, and
various soldiers. The official clad in white to the left of centre is Carel Hendrik Ver Huell. The lady on his right is his wife, who has come to say goodbye. The carriage that brought the Ver Huells to Vlissingen is waiting on Ver Huell’s wife, its door open.

This masterfully executed painting by Engel Hoogerheyden depicts a historically important episode from Dutch maritime historynd is also a visual feast in which something new is always waiting to be discovered.

B) The Fleet Leaving Vlissingen to Sail to Boulogne for the Planned Invasion of Great Britain, 1804

The war fleet is ready for departure under a sunny sky, with sloops sailing back and forth to bring crews to their vessels. A great mass of sailing ships has gathered and numerous cutters are being rowed in the foreground.

There is hardly any wind and the surface of the water is unruffled. Hoogerheyden included schooner-rigged gunboats, a type of ship that is rarely seen in paintings from this period. This pendant combines with the scene of the fleet in Vlissingen harbour to give an almost photographic account of this historical event

AN INVASION THAT NEVER HAPPENED

Europe was almost constantly at war between 1792 and 1815. The central issue was France, which was a republic first and later a Napoleonic empire.

For the Republic of the Seven United Provinces it was also a time of upheaval. France’s expansionism did not leave the Republic untouched, and in 1795 the French succeeded in overthrowing the old Dutch regime. Stadholder William V fled to England with his family and the Batavian Republic was proclaimed in the Netherlands.

The country became more or less a satellite state of France, which meant that under the 1803 Treaty of Boulogne it had to supply troops and materiel for Napoleon’s wars. The Batavian Republic had to make a contribution in the form of ships, properly armed and equipped, and to maintain an army in order to carry out an invasion of England.

Napoleon planned to end the British blockade by invading and conquering Britain. He assembled a large invasion force, called La Grande Armée, numbering some 200.000 men, who were divided into two large army camps near Boulogne.

The preparations also involved improving the port facilities, constructing forts, and building a large ‘National Flotilla’ of invasion barges in Channel ports stretching from Étaples to Vlissingen, which were to assemble at Ambleteuse, 10 kilometres south of Cap Gris Nez. From Ambleteuse the main fleet was supposed to set sail to Boulogne to collect the main invasion force.

Napoleon wanted a Dutch flag officer to command the Batavian flotilla, and the choice fell on the later Rear-Admiral, Carel Hendrik Ver Huell (1764-1845), who was presented to Napoleon in 1803 by the Batavian ambassador Carel de Vos van Steenwijk. This meeting was a success, especially as Ver Huell had the same antagonistic attitude to the English as the French ruler.

Napoleon’s plan to end the British blockade by invading and conquering Britain ran into two problems. First, the French fleet was much smaller than the British one, and secondly the French did not have good seaports between Brest and Vlissingen. The Westerschelde played a prominent role in Napoleon’s plans, in particular Antwerp and Vlissingen. The port of Vlissingen had a particularly vital part to play because of its strategic location, and Napoleon visited it in 1803.

Fulfilling the agreement between France and the Batavian Republic at such short notice was problematic, since the Republic had barely enough ships after the losses at Kamperduin in 1797.

The Dutch shipyards received commissions to deliver an entire fleet consisting of ships of the line, frigates, gun sloops or schooners, gunboats and transports, all properly armed and equipped for a successful landing in England. Moreover the Dutch had to supply an army of 25,000 men and 2,500 horses. The Batavian Republic was to deliver two squadrons, from Texel and from Vlissingen.

The Texel Squadron had to be delivered first, and consisted of five ships of the line, three frigates, two brigs and thirty large transport vessels. At the time of sailing the fleet had to be supplied with food for 25 days by the Batavian Republic. The squadron was ready to set sail in December 1803.

The Vlissingen Squadron was to consist of 378 vessels, and they were completed within six months. The squadron assembled in Vlissingen harbour consisted of 54 heavily armed schooners, 216 much lighter gunboats and 108 transports.

Ver Huell needed about 3,600 sailors to man the fleet. Now the merchant fleet was at a standstill due to all the acts of war, and the crews had become unemployed, yet it was not easy to recruit the necessary sailors.

As mentioned above, the fleet gathered in the strategically important port of Vlissingen. Here the ships were thoroughly cleaned, the sails dried and provisions taken aboard, a daunting logistical operation. Ver Huell also proved to master in this. The flotilla was ready to set sail in 1804.

The voyage took place in stages, first to Ostend and then via Dunkirk to Ambleteuse. Despite a battle with a strong British fleet, part of the Batavian flotilla reached its destination on 18 June, the rest followed later

Napoleon’s desire to conquer England was thwarted when war broke out between France and Austria and the Austrian Emperor and Russian Tsar joined forces with England. So Napoleon sensibly decided to cancel the invasion planned for 16 September 1805, but it was not until 1806 that the Batavian flotilla finally sailed homewards.

Hoogerheyden was born in Middelburg and like many boys from the province of Zeeland he had a maritime training. As a 16-yearold, he enlisted on board the frigate Sint-Maartensdijk, but two years later he joined the Dutch East India Company (VOC) and left for the East-Indies on board the East Indiaman De Liefde.

There was a serious accident when the ship sailed and he lost a leg which put an end to his career with the largest multinational of the day. On his return from the Indies there was no choice but to rely on charity. Eventually he got a shore job with the VOC as the manager of the beer cellar in Middelburg.

His knowledge of seafaring was very valuable for his drawing and painting talents on shore. He also made preliminary drawings for engravings.

The fact that he had an above-average talent was discovered by the wealthy merchant Daniel Rademacher, who ordered several works from him, and it was not long before he was receiving commissions from the VOC, admirals, captains and merchants to portray their ships.

From 1779 onwards he developed into a maritime chronicler of the Netherlands, and in particular of the province of Zeeland. He is considered to be the province’s leading marine painter, and his works are key to our knowledge of the seafaring Netherlands around 1800.

The profession of marine painter had died out at the end of the 18th century. The days of such great sea painters as Willem van de Velde and Ludolf Backhuysen were over and done with, or so it seemed, and the Netherlands as a seafaring nation was on the decline. Hoogerheyden became a specialist in the marine genre. In addition to sea battles, his native city of Vlissingen played a major role in his work.

In this VOC city, with its wealthy bourgeoisie and many senior naval officers, he found good paying customers for his paintings and drawings. For example, in four drawings he recorded the sinking of the VOC ship Woestduyn off the coast of Zeeland, which the famous Mathias de Sallieth turned into engravings. Engel Hoogerheyden’s renderings of ships are of an outstanding quality.

Ver Huell started his career as a naval cadet and was eventually promoted to Rear Admiral in 1805. He was initially a supporter of the Orangist cause, but his anti-English attitude determined his political conversion.

The Batavian fleet was also involved in Napoleon’s plans for an invasion of the arch-enemy England. and Ver Huell was given the command of the flotilla. On the outward journey to France, the Batavian fleet got into a battle with a far stronger British force. But Ver Huell defeated the British, and as a result became the first foreigner to be awarded the Legion of Honour.

He became a naturalised French citizen in 1814. Many honours were lavished on him. King Louis Napoleon appointed him Marshal and Count of Sevenaer and Napoleon elevated him to Comte de L’Empire. Ver Huell died in France and is buried in the Père Lachaise cemetery. 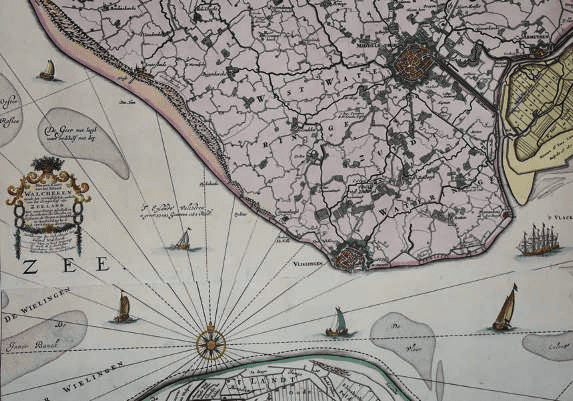 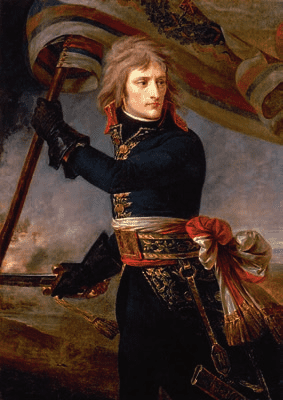 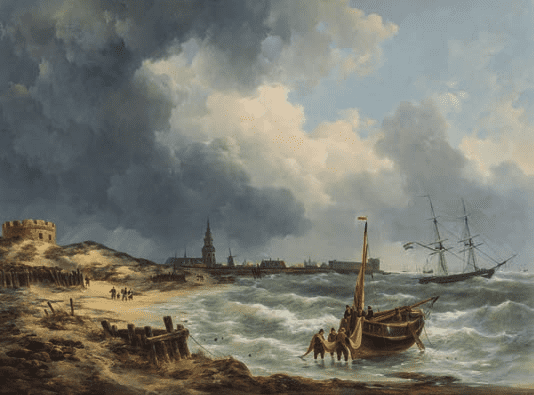 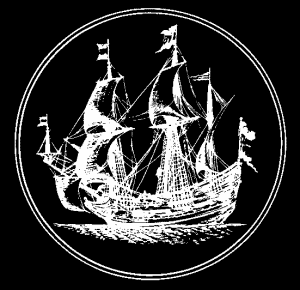 Two rare and historically
important marine paintings by
Engel Hoogerheyden (1740- 809),
considered the best in his oeuvre

The Vlissingen Squadron of 378 ships
as part of the Batavian fleet (1804),
in Vlissingen harbour.
Assembled as part of